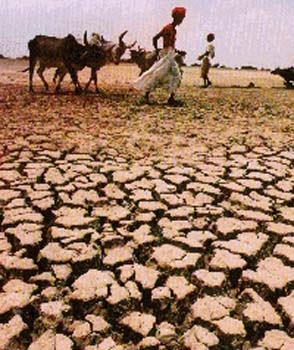 India is facing its worst drought in 5 years. It has raised serious concerns on food inflation, lower demand for consumer products, reduced exports and increased imports. The farm sector accounts for around 14 per cent of India’s economy and two-thirds of its 1.2 billion population live in rural areas who are primarily dependent on agriculture.

The climate-driven water scarcity badly affects food production, especially in subsistence sector especially the Small and marginal landholders who are particularly vulnerable to the localised effects of climate change. It is anticipated that yields from rain-fed farming in some south Asian countries could fall by up to 30% by 2050. The poorer developing countries in tropical arid and desert regions are threatened by extreme poverty and water scarcity due to repeated droughts. Nearly 85% of farms measuring less than 2 hectares produce 80% of the world’s food. Given their involvement in the world’s food system it is important to put them at these small farm holders at the centre of strategy for climate adaption. In Indian Agriculture, Rain fed agro-ecosystem occupies 65% of the cultivated area and therefore the need for Climate Risk Management becomes all the more critical.

India still does not have a defined drought policy, although the country has started an ‘anticipatory drought management approach’. The drought management systems primarily are designed and equipped to view drought as a transient phenomenon to be dealt with on a piecemeal basis and as & when, they happen basis. Most of existing practices are essentially fire-fighting models centered on providing relief, when the efforts should have been directed at drought-proofing the country.  Today, drought management means large-scale resource transfer in the form of income, food, water and fodder to drought-affected regions, which is unsustainable. Drought-prone communities, villages and areas have to learn to adopt and sustain drought- proofing methodologies and the efforts should be to help and support those efforts in very planned and focused manner.

The Policy makers should take a serious view of the impact of uncertain rainfall patterns leading to drought or flood. The spending on Climate change and Drought proofing needs to be increased under a master plan with targeted approach rather than providing relief only on as an when basis.

The views expressed in this article are purely personal.