Enabling Agri-Value Chains, Creating Transparent & Efficient Agriculture markets, Ensuring Farmer’s income security & striving for a hunger free India
1.Indian Agriculture has undergone a structural shift but has created lot of disguised unemployment
We still need to realize & recognize that over 58 % of the rural households depend on agriculture as their principal means of livelihood in India and 83% of farmers are small and marginal. Agriculture along with fisheries and forestry, contributes to more than 17% of Gross Domestic Product (GDP) of country. Having said this India still remains and agrarian economy and a single bad monsoon takes toll on entire economy and can completely derail the projected growth plan. The demand for food is going to go up by 40% by next decade, with the pace our population and demand for food consumption is going to change.
While the agriculture sector in India has undergone significant structural changes indicating a shift from the traditional subsistence towards a market oriented one. The rural economy has moved from exclusive reliance on agriculture to a service dominated one that has a stabilizing influence on rural incomes. Agriculture today employs more than 58% of people but the decrease in agriculture’s contribution to GDP has not been accompanied by a matching reduction in the share of agriculture in employment, which means that there is is lot of disguised unemployment in agriculture.
At the same time India has a “serious” hunger problem and ranks 100th out of 119 countries on the global hunger index — behind North Korea, Bangladesh and Iraq. The country’s serious hunger level is driven by high child malnutrition and underlines need for stronger commitment to the Agriculture sector as per the International Food Policy Research Institute (IFPRI)
However, within the rural economy, the share of income from non-farm activities has increased. Since agriculture forms the resource base for a number of agro-based industries and agro-services, it would be more meaningful to view agriculture not as farming alone but as a holistic value chain, which includes farming, aggregating, processing, warehousing (including logistics) and retailing.
2. What is “Value Chain” and What does it mean?
The term “value chain” describes the full range of activities that are required to bring a product or service from conception, through the different phases of production (involving a combination of physical transformation and the input of various producer services), delivery to final consumers, and final disposal after use. In agriculture, value chains have always been in existence in the sense that farms carried out production and the final consumer accessed the produce, with the produce itself traversing through several channels and players.
Why do we need a Agri Value Chain?
The first on foremost thought that comes to my mind is to “Make the country free of hunger”. We are ranked 100 amongst 119 countries in world. In simple terms Agri Value Chain are meant to Capturing the value created along the Agriculture chain from pre sowing to food harvest or in other words capturing value created from “Farm to Fork”.
The Agri Value Chain is primarily needed to address the following-
Unfortunately, India remains the Chronic Hunger Capital of World despite the fact that our country
3. What a paradoxical situation? We grow more. We waste even more. We waste more food than that produced by Developed and Rich nations. 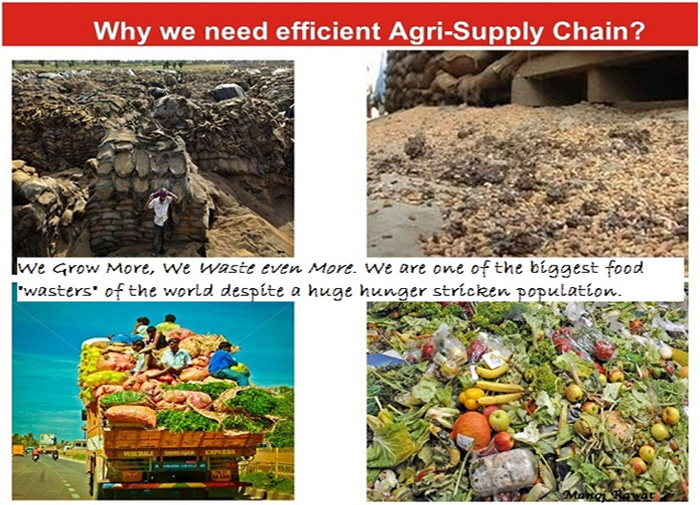 India is among the biggest food wasters in the world 1. India wastes wheat equivalent Australia grows in a year 2.We waste more fruits & vegetables than that consumed by United Kingdom in a year & so on…
The irony is despite such a wasteful situation, India accounts for the highest estimated number of hunger stricken people, about one in every four such people in the world.
Capturing the value created along the Agriculture chain from pre sowing to food harvest or in other words capturing value created from “Farm to Fork” will only ensure the farmer “rightful price for his produce” and also ensure that the country moves towards “nutritional security”
4. What is the challenge?
The degree of organization and governance of the value chain while improving continues to be a challenge. The existence of several middlemen, absence of information about other links in the chain and inability to invest in improving the performance in almost every part of the chain led to inefficiencies and lower incomes especially in the lower end of the chain. The recent initiatives have focused on improving technology of production, processing, quality control, creating processing facilities that add value to raw produce and aggregation near farms to ensure higher share of consumer prices for the producer.
5. Creating Income Security for farmers? A Challenge that can be addressed.
India has seen significant growth in its food production over the last few decades but a large part of population still remains deprived of the basic access to nutrition and the middle class highly vulnerable to food inflation. Above all farmer has been struggling to get the “minimum remunerative price” or even meet his “production expenses”. The credit flow to Agriculture has grown by more than 10 times in last decade however the income of farmers & share of farmer in “consumers” wallet has not seen any significant increase. The narrative has changed from “Doubling of Credit” to “Doubling of income of farmers” and rightly so. The intent of creating income security for farmers seems right, given the current state of India’s agriculture and the plight of its farmers.
While we have seen the real farm incomes have plummeted as compared to previous decade, it is not wishful thinking that incomes of farmers can be doubled by adopting a multi-pronged approach which efficient implementation framework. While this would involve high focus productivity, expanding irrigation facilities, augmenting the flow of investment credit to Agriculture Sector under a value chain approach and making investment in allied activities like livestock, poultry, beekeeping and fisheries, but the biggest challenge would be 1.      To bring in real-time efficiencies in Agriculture markets 2.      Curbing the number of existing intermediaries in the current Agriculture marketing system 3.      Building robust and sustainable Agri-value Chains network
6. Crying need for reforms on field:
To develop efficient Agri Value Chains, there is crying need for Reforms, better market information and use of Information Technology.
The country needs to completely revamp its entire agriculture market management policies, focus on creating adequate marketing infrastructure especially at farm gate level, promote sustainable marketing linkages and ensure scientific pricing for agriculture products to foster true competition in the market to make them efficient & more productive. The existing Public and Private sector investments, Government schemes and subsidies need to dovetailed effectively and channelized efficiently to make this a reality rather than being distributed isolated projects making limited impact
6. No Dearth of Markets and Market Places.Create more markets No. Enable existing markets Yes ! 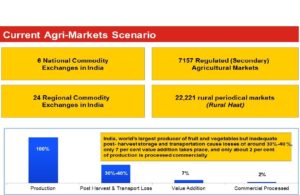 There is no dearth of market places in India but here is lack of efficient market linkages, basic grading sorting centres, logistics to ensure better participation of stakeholders primarily farmers and above all removing the infestation of intermediaries who “add literally no value”. Lack of efficient markets fails to facilitate the “Producer find the best Buyer and Buyer identifies the best supplier”.
We have more than 7000+ Regulated Markets, 22000 + Regular Periodic markets in primitive shape and thousands of un-organized Haats, fairs, assembly markets. In addition, we have 6 National Commodity Exchanges and 24 Regional Commodity Exchanges, who could play an important role in rightful price discovery for farmers.
The markets continue to follow a very subjective practice which has promoted monopolistic practices, procedures and market inefficiencies. There is lack of grading infrastructure, no premium for quality, unscientific post-harvest handling of produce and the markets are still being controlled by middlemen as who add “little value or no value”. The Linkage between farms to markets are grossly inadequate with no basic grading and sorting centres, pre-processing units and above all the Logistics and Information technology interventions remains literally remain non-existent. Fundamentally the system is only production oriented and detrimental to preservation, processing & value addition.
7. Unified Agriculture market – Right step but hardly participative
To develop efficient Agri-value Chains, there is urgent need for Reforms, better market information and use of Information Technology that can attract large capital and skill based investment in Agri-Supply Chain sector which estimated to multi-billion dollars. The Unified National Agriculture Market(e-NAM) is a step in the right direction but is not participative and has to make lot of efforts, policy changes, sensitization and incentivization to make it far more participative. As on today <2.5% retail players/stakeholders/farmers have registered on this platform which needs to be accelerated and we need to have serious thought on why market is so non-participative. The trade potential on an e-NAM platform is more than Rs 100,000 Crore over next 3-5 years. We need to unify this market in the interest of farmers, consumers and economy of the nation.t is important understand Agri Supply Chains must remain as “work-in-progress” and continuously evolve. “Agri value chains” should keep tab with developments in Agriculture segment, policies, global market and consumer needs with the following being at the center. 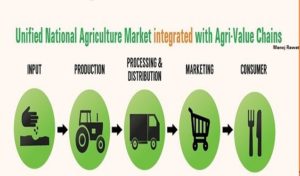 The situation in India demands to “needle”  the various factors into a single thread that would provide end-to-end solutions for efficient market and better price discovery for producer, processor & consumer and develop efficient “#AgriValueChains”, which may ultimately create a “#hungerfree & adequately nourished” India.
No matter whatever development happens in technologies, mankind will still need Food and Water to “survive”. We need to ponder how come the oldest profession of universe known as “#Agriculture” has become unprofitable, when each one of us, rich or poor, walking on this earth, work & earn for”Food” and “Water” to live and survive. It’s not just a matter of income security for farmer but a matter of survival for all of us & food security of the nation.
We have no other choice but to gear up!
#AgriValueChain #DoublingFarmerIncome #HungerFreeIndia #ValueFinIndia
———————————————————————————–
Manoj Rawat | Founder & CEO, ValueFin India | mkrawat@gmail.com #TheManojRawat