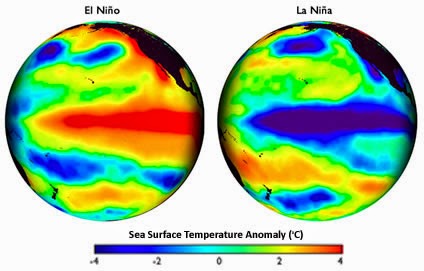 The term El Niño (Spanish for “the Christ Child”) was originally used by fishermen along the coasts of Ecuador and Peru to refer to a warm ocean current that typically appears around Christmas time and lasts for several months. Fish are less abundant during these warm intervals, so fishermen often take a break to repair their equipment and spend time with their families. In some years, however, the water is especially warm and the break in the fishing season persists into May or even June. Over the years, the term “El Niño” has come to be reserved for these exceptionally strong warm intervals that not only disrupt the normal lives of the fishermen, but also bring heavy rains.

What is La Niña?

During La Niña, which is just the opposite of El Niño, less heating leads to colder sea waters off western South America coast, thus making it a high pressure zone which pushes the moist sea winds towards the Indian Ocean therefore, increasing chances of normal or excessive rainfall in the Indian sub-continent.

The formation of an El Niño is linked with the cycling of a Pacific Ocean circulation pattern known as the southern oscillation. In a normal year, a surface low pressure develops in the region of northern Australia and Indonesia and a high pressure system over the coast of Peru. As a result, the trade winds over the Pacific Ocean move strongly from east to west.

In an El Niño year, air pressure drops over large areas of the central Pacific andalong the coast of South America. The normal low pressure system is replacedby a weak high in the western Pacific (the southern oscillation). This change in pressurepattern causes the trade winds to be reduced. This reduction allows the equatorial counter current (which flows west to east) to accumulate warm ocean water along the coastlines of Peru and Ecuador. This accumulation of warm water causes the thermocline to drop in the eastern part of Pacific Ocean which cuts off the upwelling of cold deep ocean water along the coast of Peru.

The development of an El Niño brings drought to the western Pacific, rains to the equatorial coast of South America, and convective storms and hurricanes to the central Pacific.

Monsoons are winds caused by the temperature difference between a land mass and the adjacent ocean. Monsoons occur throughout the world — parts of Africa, the Arabian peninsula and Arizona and the neighboring regions of California and Mexico. But the Indian monsoon — which besides India, also affects other regions of south and southeast Asia and Australia — is the most monetarily important because of its profound influence on the economy of India and neighboring countries. It is directly linked to the ENSO phenomenon. In summer months, temperatures over much of India rise to as high as 110 degrees Fahrenheit while the Indian Ocean is much cooler. Consequently, the warm air over the land rises and cooler moisture-bearing air blows in from the sea, bringing heavy rains to the region.

What the Records Show?

Analysis by the India Meteorological Department shows that, of the 18 El Nino years between 1880 and 2006, twelve coincided with deficient or below-normal rainfall in India. This means that, for a third of the time, there was no correlation, and that has resulted in some spectacularly wrong forecasts for the monsoon. More recent research aimed at finding a more robust correlation indicates that not all El Ninos cause drought, and only warming in the central Pacific correlates with drought in India while warming in the eastern Pacific means a normal monsoon.

Here is a table showing the records of El Niño and La Niña years in the last decade.

Here is a list of droughts taken place in India in last two centuries. Some of these have been an outcome of the El Niño phenomenon.

Impact of El Niño on India

El Niño and the Indian summer Monsoon are inversely related. The monsoon is the main source of irrigation for India’s 235 million farmers and planting of crops from corn to soybeans are dependent on timely arrival of the seasonal rains as more than half of farm land is rain-fed. Agriculture represents about 14 percent of Asia’s third-largest economy, which is also the world’s second-largest producer of rice, sugar, cotton and wheat

El Niño years directly impact India’s agrarian economy as their effect tends to lower the production of summer crops such as rice, sugarcane and oilseeds. This in return causes inflation to surge and lowers the Gross Domestic Product (GDP). India is the second largest producer of rice and wheat in the world.

Though El Niño will affect the weather worldwide, countries like India that are largely dependent on Monsoon rain will bear the maximum brunt of it. Rainfall is likely to be less than Normal during southwest monsoon season throughout the state and more than normal during rabi season.

El Niño is not a desirable signal from the point of view of total food grain production and productivity as well in larger part of the state, although the magnitudes vary geographically.

Reliable climate predictions may not be available immediately and it might takesome more time and until then, the necessity arises to identify some of the globalparameters like El Niño, which can be used as a signal to climate variability at leastduring some of the years, even if not for all the years.

There are increased signs of El Niño like conditions but it’s still not clear how strong it will be. Going by the 50-year average the predicted rains is 96% and it is expected that actual rainfall may be 5 percent more or less than the prediction.An El Niño has not always resulted in weak monsoons in India and mitigating factors this year may include comfortable reservoir water levels and excess food grain.