A “Crucial Comma” and a “Peace clause” disrupt the Peace at WTO’s Trade Facilitation Agreement Signing – Has India played a spoiler or the defiance is completely justified? 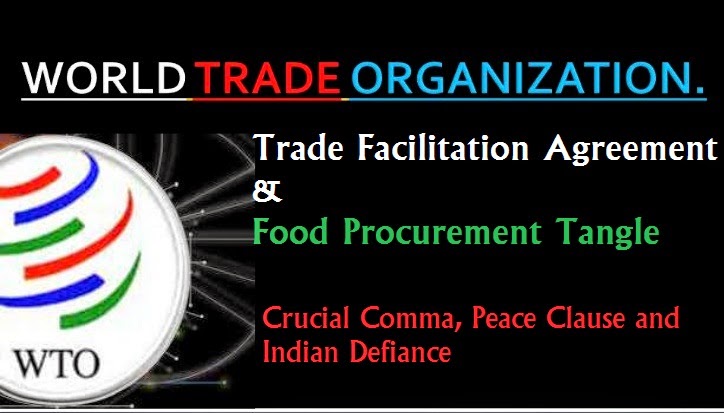 India has withdrawn to sign this agreement and the world feels India played the major spoiler and now stands almost isolated. It’s because India decided to link the agreement with finding a permanent solution on food security. The last minute defiance seems a calculated step considering the compulsions of the country, the implementation of food security act and even more to protect the sovereign right of a country to procure food from its farmers

With the implementation of Food Security Act and increase in Minimum Support Price ( MSP) are by 10% every year, the food procurement from farmers will increase and there is a high probability that India may cross the 10% limit and  may be subject to penal action at WTO.  India has been demanding a review of the food subsidy limit but the developed countries have refused to agree with the same.

Besides, the 10% ceiling is based on 1986-88 prices, while actual subsidy calculations are based on current prices. US and EU have been resisting any change in reference price from 1986-88 with the argument that this will re-open WTOs Agreement on Agriculture (AoA).

India has been clear there should be no interference with the massive food procurement program until a permanent solution is found to the provisions within the WTO that restrict offering procurement prices to farmers beyond a certain level.

The way the agreement was drafted and the confusion over how long the “peace clause”  will be in place made things ambiguous. One interpretation was that it will only be in place till a permanent solution is found and the other is it will stay intact till 2017.

While India cannot afford not to be part of major trade agreements being the second largest population and one of the important growing economies, signing of this Agreement without linking food security could have other ramifications. WTO will reassemble in December 2014 and fresh attempts should be made to salvage the deal and bring things back in place including the concerns on food procurement.

It is in the interest of future of the multilateral trading the deal is salvaged with suitable tweaking. “No missing comma again”..

The views expressed in this article are purely personal