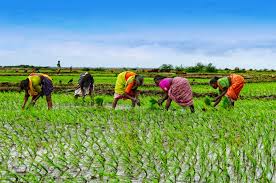 Focusing on productivity of the agricultural sector to lift the incomes of smallholder farmers is one of the most direct routes to addressing rural poverty. Despite multiple interventions, agriculture has not kept pace with growth in Indian economy. Today Indian yield per hectare is half the average of China, Indonesia, Malaysia and Thailand and many other developed countries of the world.

Government spending in agriculture sector has been focusing for decades on input subsidies and output price support pricing rather than investment in agricultural infrastructure, research and extension services (which educate farmers on new technologies and best practices).

The governments seem to be spending far higher on input subsidies than building storage, irrigation systems, as well as scientific research and extension services. Subsidies are critical and can be continued but the investment in capital formation needs to be augmented at much rapid pace through Public, Private and People partnership.

Policy-makers at all levels of government, both national and state, should be focusing on an agenda that emphasize farm sector productivity and more innovative delivery of social programs which create jobs in Rural India.

Effective Governance and Rural supply chain control should be closely looked with a very high priority in India.
Besides, Rural India can become the biggest wealth churner for companies and corporate houses, should the focus be right !

The views expressed are purely personal.